While watching the second half and overtime of the Orlando Magic @ Utah jazz game last night, I was reminded what I love and loathe about the NBA game, and why I am a more ardent fan of the women’s game.

My love is for this beautiful sport that allows for individual expression in the context of a united team pursuit, a game both graceful and brutal in a single moment. The NBA players today are, for the most part, the best conditioned, most freakishly athletic, quick twitch fiber honed humans on earth.

Which brings up the loathing.

While today’s athletes are stronger, quicker, faster and larger than their counterparts from thirty years ago, too many of them seem more focused on issues tangential to the pursuit that pays them obscene amounts of money: personal branding, highlight reels, endorsements and the like.

The 21st century NBA player of notoriety is more entertainer than athlete, more celebrity than jock, more entrepreneur than employee. The reasons for this transformation are reflected in, or rather reflective of, the sociopolitical atmosphere from which it emerged.

When David Stern succeeded Larry O’Brien as NBA commissioner in 1984 he walked into the perfect storm. While revitalized by the Magic Johnson / Larry Bird

friendly rivalry (conveniently located in major markets on opposite coasts) the general public viewed the NBA as a collection of ghetto fabulous drug addicts bent on living like proverbial rock stars. Small market teams teetered near constantly on the brink of insolvency, fire sales of their best players a common, if not annual, occurrence. In 1984, the metamorphosis had begun. The collective bargaining agreement between the league owners and the players association allowed, for the first time, drug testing of players (in an effort do deal with a problem all but the league and players association readily acknowledged) and  a team salary cap (an effort to create competitive balance). It didn’t hurt that the 1984 draft provided four iconic, marketable, unique personalities around whom the NBA could go about the task of rehabilitating its image–Michael Jordan, Hakeem Olajuwon, Charles Barkley, and John Stockton. (Curious aside: The Chicago Bulls, in the tenth round, selected Carl Lewis,

who would go on to achieve fame as an Olympic gold medal winning sprinter.)

Following the successful formula that had buoyed the NBA to unprecedented popularity, the league promoted Bird, magic, Dr.J, et al, like the movie studios promoted their stars, larger than life, otherworldly idols. This approach led to growth, expansion into new markets, and prosperity for the league, its franchise owners, and players (and their representatives). This celebration also led to players viewing themselves not merely as athletes, but as entertainers.

And that– the athlete as entertainer, the court the stage, the game as performance– is the attitude that diminishes the game for me. The mugging for the ubiquitous cameras, the chin ups on the rim following a dunk 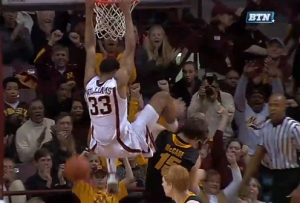 (that used to merit the assessment of a technical foul), the god awful flopping 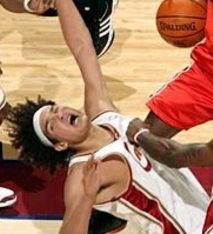 ..the game mirrors in far too many aspects the choreographed hooey of professional wrestling.

I love the game. I loathe the hype.